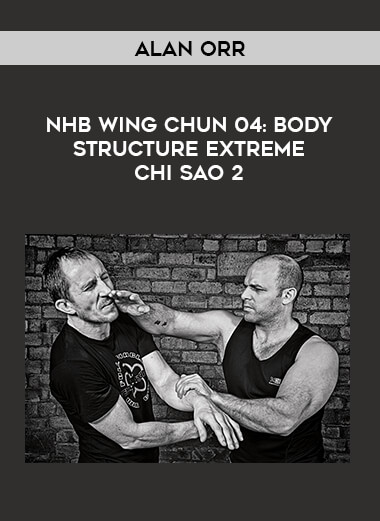 – Dealing with advanced principles of Chi Sao application – Don’t sleep until you have seen this!

– Understanding range control – Close, medium and long range combat\sdrills. It time to understand what your real goals are in Chi Sao!
-\sDistancing for complete opponent control – Learn to bridge your skills\sfrom basic Chi Sao to functional Chi Sao! A must for all Wing Chun\spractitioners!

NHB Wing Chun is the long-awaited instructional DVD series from Alan\sOrr Sifu, revealing the training methods and techniques which have\stransformed his fighters and students into champions. Alan’s\sgroundbreaking application of Chu Sau Lei Wing Chun into competition\scombat has been a revelation. If you ever thought Wing Chun had little\sapplication in ‘real fighting’ or under ‘No Holds Barred’ conditions\sthen THINK AGAIN!

This myth has been well and truly buried – NHB Wing Chun is here to stay!

Top\sfighters like Neil ‘The Berserker’ Broadbent (Amateur National NHB\sLightweight Champion and now NHB pro fighter) and Aaron Baum (Amateur\sNational NHB Middleweight Runner Up and now NHB pro fighter) have shown\show applying these techniques in your training will take your skill in\sWing Chun and combat to the next level. Both these guys have finished\sopponents with body shots!

Be under no illusion, this is Wing\sChun as you have NEVER SEEN IT BEFORE! In his previous instructional\sDVDs, Alan Orr Sifu promised there was much more to come, and this\sexplosive series has been released in DIRECT response to demand from\sstudents and supporters to have access to a complete and accessible\slearning tool for these methods.

WELL, THIS IS IT! The NHB Wing\sChun DVD series incorporates the pure essence of Wing Chun with\sdevastating techniques that apply the art to combat under the most\sextreme conditions.

NO MATTER WHERE YOU ARE IN THE WORLD,\sNOW YOU CAN LET THIS AMAZING TEACHING METHOD COME TO YOU AND TRANSFORM\sYOUR WING CHUN AND COMBAT SKILL! A COMPLETE DVD COURSE IN THE MOST\sEXTREME AND EFFECTIVE WING CHUN YOU WILL EVER SEE!

This is\sthe Wing Chun that everyone is talking about and this series really\s’lifts the lid’ on the techniques and applications that REALLY work in\sWing Chun and how they can transform your combat performance and skill\slevel. If you practice Wing Chun, you need this instructional series. If\syou train NHB/MMA you need this series. In fact, if you train any\scombat art, then there are hours of high-quality instruction and\sadvanced techniques that will benefit you as a martial artist.