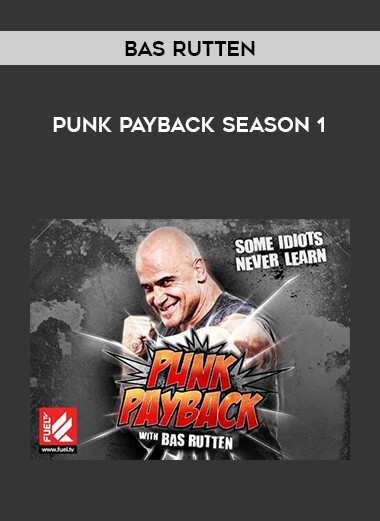 (From the guy who suggested throwing hot sauce in an assailant’s eyes )UFC heavyweight champ and 3x King of Pancrase, Bas Rutten, has surveyed hundreds of hours of footage and found the best examples of punks who have gotten away with their crimes.
Along with the hottest stars of MMA, motocross, and skateboarding, Bas will reenact each scenario, demonstrating the necessary combat moves one would need to survive on the streets.
Watch out punks; it’s time for the little guy to take charge in Punk Payback.
DVD 1. Palm Madness
After years as a professional fighter, Bas Rutten, former UFC champion and King of Pancrase showcases all of his considerable fighting talents stopping robbers, carjackers, pickpockets and other ‘punks’ in their tracks.
22min.
DVD 2. All Ages and Sizes
How is it possible that a punk thinks it’s possible to rob a bank with no weapon? And why would you run into a convenience store, with surveillance cameras rolling, wearing nothing but a see-through plastic bag over your head for a disguise?
22min.
DVD 3. The Pole has It
One question has never been answered in the world of armed robbery…can a man rob a convenience store with a 10-foot pole? We’ll find out as Bas confronts the punk, who runs into a store welding a 10-foot wooden pole and demands the cash!
22min.
DVD 4. Handicap Zone?
Tonight former UFC champion Bas Rutten takes on a punk who uses crutches as a disguise, and another who attempts robbery without a weapon in hand. Professional MMA fighter Erik “Bad” Apple guest stars.
22min.
DVD 5. To G-String or not to G-String
A drive-through drag queen armed with a gun. In episode 5 of Punk Payback with Bas Rutten, it’s all par for the course. Freestyle motocross pro Cal Vallone guest stars with former UFC champion, Bas Rutten, to take on punk criminals from all walks of life.
22min.
DVD 6. Boxing Day
Fists, knees and head-butts fly – and former UFC champion Bas Rutten is just getting started. The former UFC champion takes on a brand-new slew of punks with questionable smarts – and even less credible intentions. MMA pro Erik “Bad” Apple guest stars.
22min.
DVD 7. Multiple Socks
Bas Rutten lays down amazing moves for multiple assailants, turns the tables on a lottery-ticket thief, and Bas introduces a cane-bearing gentleman, who isn’t afraid to rumble.
22min.
DVD 8. Mop versus Stick
Former UFC Champion Bas Rutten faces a wannabe thief with an unusual weapon, to see who’s stronger — man or mop.
22min.
DVD 9. Stealing Chances
Freestyle motocross pro Nick Dunne guest stars to help Bas Rutten take down punks armed with everything from baseball bats to flip-flops, as knees, elbows and chokes collide.
22min