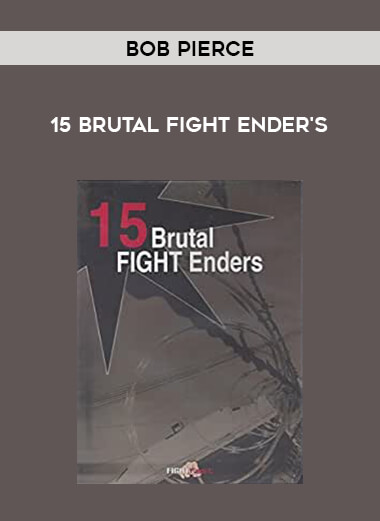 This DVD includes techniques from experts like Mike Serr, Vladimir Vasiliev, Demi Barbito, Kathy Long, Jim West, Felix Valencia, Frank Cucci, Chris Clugston, Larry Wick, and many others from systems like Krav Maga and other RBSD systems.
The techniques include the use of hair combs for self defense, grappling moves (armbars, leglocks), takedowns, biting, finger ripping, etc.
Here’s just a small taste of what’s in this intensive 100-minute “Brutal Fight Enders” DVD package:How to use a single knuckle-blow (using very little pressure) into an easy-to-hit pressure point to bring a man of ANY size to his knees in excruciating pain.
(It’s almost funny to see little kids and small women use this to dominate full grown men).
A very cool “upside-down handshake” trick used by savvy bar bouncers to stop trouble just as it’s about to start.
Land him on his knees in seconds with YOU in total control (he’ll be obeying your every command).
A simple “human pliers” move that will shred through flesh and muscle and send him reeling into shock.
It’s a bloody and ruthless technique – but it’ll instantly strip away his willingness to fight (and convince ALL his pals that you are NOT playing around).
FOUR simple “improvised” weapons (I’ll bet you’re carrying at least two of them on you right now) that can be instantly lethal when used properly.
This is how you’ll take ordinary objects and turn them into vicious fighting tools that he WON’T be expecting.
A single deadly strike that will either (a.) instantly knock him unconscious or – with slightly more force applied – (b.) disconnect his spinal cord from his skull.
This is as brutal as it get.
A very nifty “underhand lace” move that uses the back of his neck and the “V” of your leg to snap his arm like a pretzel while you choke him out.
Yes…wicked and humiliating (for him)…but so simple and effective it’ll all be over in seconds.
One hell of a brutal “shoulder roll” leg-bar (very simple to do) for anyone stupid enough to bear-hug you from behind.
It’s shocking how quick this will “pop” his knee…and leave him begging for a ride to the emergency room.
And much, much more……
The vicious “distract and pivot” that takes advantage of easy soft-targets that MOST people leave wide open……
How to properly use your knee cap (most experienced streetfighters don’t even know this trick) for maximum damage……
The punishing “nose bridge” (looks innocent enough, but inflicts mind-numbing pain)……The blinding “thumb rake” (one hell of a brutal move)……
An Israeli Special Forces bone crusher (doesn’t require a lot of force, but highly effective in shattering specific delicate bones)…and on and on.
It’s all here…And Plenty MORE!