Take a look at all the super wealthy who made their fortune in real estate and you’ll see it was Commercial Property that made them rich.

Now I know that sounds strange coming from a guy who teaches residential real estate and is world renowned as the expert in it. So let me defend myself.

First, a lot of people get rich with single family houses. I’m one of them and I’ve taught perhaps thousands who have done so. But there’s rich and there’s super wealthy which to me means a net worth of over $100,000,000. You’d be hard pressed to find a super wealthy house buyer. 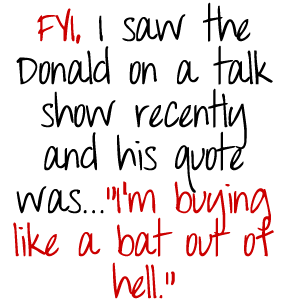 Second, I buy commercial property and teach others how to do it as well but since that’s not what I’m famous for you don’t see me as the Donald Trump of real estate who made his fortune in commercial.

The Donald can spot opportunity when he sees it and frankly any idiot could see it in the commercial slaughterhouse going on in America for the last six years. I should know, I’m dead center of it and have… Personally lost over $150,000,000 in value in my commercial projects!

No I didn’t say I lost a hundred and fifty million real dollars. I never had it to lose but I can honestly say I lost that and more in future after developed equity and cash on projects that will never get built because of the current market.

I have lost millions in actual cash and will be several more years cleaning up the blood from twenty one commercial projects I purchased from 2004 – 2006, including over fifty million dollars in personally guaranteed debt and millions in private equity capital.

I didn’t create the recession and my timing really sucked and the fallout from my commercial projects will be with me for the rest of my life.

So why am I telling you this at the risk of scaring you away and at my own personal exposure?

I see smart people creating huge windfall profits from the bottom feeding in progress. Here’s a few examples I’m personally familiar with or involved in…

Ok, I’ll admit it is depressing, especially if you’re on the receiving end like I am.

But if you’re on the outside looking in at the opportunity and know how to buy or control these assets without risk to you the movie is much more fun to watch.

You now become the predator, not the prey – you’re in control not the slave to circumstances and you can build massive wealth from what you know, not your credit or capital.

I can teach you these things and will do so in the one Commercial Boot Camp I’ll do this year if you have interest and truly want to create life changing wealth with commercial real estate.

But Ron, you just told me you lost a fortune and now you’re suggesting you can teach me.

I’ll go through several of my projects and show you the cool strategies I used to buy them and why I did so. You’ll see how I crunched the numbers, made the decision to buy, planned the exit, how I raised the money, how I built a dream team for each not living in the same city, and…

A lot of time will be spent on raising the capital and how to structure the deals with as little cash as possible and several ways to make money without buying any property. You’ll see several profit centers in each deal and several places to exit so you can get out quick or stay in for the big money.

You’ll learn my own patented technique I use to become a land developer without buying the land. In fact, you get paid $10,000 per month per project while other people do the work and you get half the profits with no investment or risk.

You’ll make the land owner rich by doing what he/she can’t and won’t do and use the land to get the capital to pay you and get the work done to raise the value. Every word I just said is true and I’ll supply you with the agreement to make it happen and the training to pull it off… on several projects simultaneously.

We’ll discuss how to structure the entity to buy and lessons I learned when taking on partners that’ll serve you in any endeavor. I’ll teach you how to insure partner performance and stay out of court when they don’t by using simple strategies that cost me at least $250,000 in legal fees to learn. My hard learned lessons, from 30 years experience and willingness to share will save you a fortune and make you one if you listen.

I’ve invited three friends to bring their expertise to you and they are top in their field, all of which should interest you.

Lance Edwards is living proof of his mantra that you don’t have to “graduate” from single family to multifamily – you can start with multifamily. Lance purchased his first deal (a four-plex apartment) in March, 2003 – nothing down. Over the next 2 years, he went on to purchase 50 units nothing-down on a part-time basis, while working his full-time corporate job. In July, 2005, Lance retired from his 20 year corporate career to start a full-time real estate business that acquires multifamily properties. And he now teaches others how to create faster financial freedom with apartments using none of their own money. Last year, he purchased 10 unit and 50 unit apartment buildings – all nothing down. Just recently, he closed a 56 unit property – again using none of his own money.

Scott is the undisputed self-storage champion with hundreds of units all over and he makes this such a small business. He has a very unique way to acquire and fund his units and they are all operated on auto pilot.

These things are cash cows and the worse the economy gets the better this business becomes. Scott will take you behind the curtain and disclose the real facts and you’ll see why self-storage is one of the fastest growing segments of real estate and how to retire with them.

This guy has bought and sold over 7,000 pieces of land. That’s not a misprint…seven thousand. I’ve never seen anyone do what Jack does with land and his unique business was discovered by accident while buying houses.

If you want to make some easy cash and get free land you won’t sleep after Jack leaves. By the way, it’s all done on auto pilot and you don’t need to get involved in all the costly entanglements of land and development, building, zoning or city council meetings. Jack is in and out quickly and never touches or visits the land. This is really cool.

This event is designed to train you on things you’ll never learn from anyone else alive but its also morphed into a Deal-a-thon.

Before it starts I’ll have a call to help you locate some good prospects to bring to class and I’ll bring skilled staff to go through them with you. We’ve created a lot of good deals this way and maybe we can get you to your first one.

We’ll prepare a letter of interest in class if you want to make an offer after we dissect it. You’ll get all the agreements to buy and sell buildings or land and how to use them.

Worse case, you learn a lot while actually making an offer. Best case, it gets accepted. No extra charge to try. You and the entire class will see how I analyze your projects and mine.

That’s my specialty but I’ll admit some of your best deals will require a loan from some kind of lender if you want to take it that far before you exit. I’ll have several contacts for lenders for different purposes, carefully selected by myself and faculty who use them.

That’s actually the easy part if its income producing but as I said earlier I’ll try to talk you out of it first. There’s always a market to buy income streams but they’re harder to build than sell.

You’ll see my retirement plan for you and just one project can do it.

This event cost $5,995 a few years ago and it was full. You’ll get that much value the first day and if you don’t, just say so and leave and get a full refund. The cost has been drastically reduced for a short time to $3,995, but take a look at the registration and build your own financing plan and discounts.

Sorry, no bonuses, no bribes, no tricks. If I have to resort to any of that to get you I don’t need you in the event. Its not for everyone.

Ok, if I haven’t scared you off by now you can register below and save more money on a special VIP offer with a short window. If you’re Canadian there’s no PST, GST, HST or any other ST and we’re using US dollars so you can get another discount on the exchange rate.

FYI, Canadians are ripe for this event. You guys are sitting on a gold mine all over Canada and will have an unfair advantage over your competition when you know what I know.

To Your Quantum Leap,
Ron LeGrand