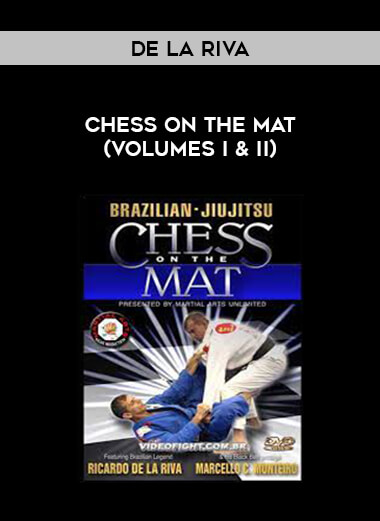 Chess On The Mat is a new and innovative concept in Brazilian Jiu Jitsu seminars designed to take you into the mind and strategies of one of the most celebrated BJJ coaches and fighters of all time, Professor Ricardo de la Riva. Rather than simply teaching random techniques, de la Riva has teamed up with his black belt prot�g� Marcello C. Monteiro to teach you the theories, strategies and details behind the techniques and how they work in a high level Brazilian Jiu Jitsu game.

De la Riva will share his exciting and dynamic BJJ positions, attacks, sweeps, chokes and submissions which have made him a legend on the mat. He will also teach his trademark Guard position, including the famous de la Riva Hooks, which have led such notable fighters as the Nogueira brothers to seek out his instruction.

In a counter for counter format, Team de la Riva standout Marcello C. Monteiro will teach the counters against his teacher`s positions, and show you how to challenge anyone`s game! He will develop the strategies to pass the de la Riva Guard and show you how to take your game to the next level. You will see first hand why Monteiro is called “the encyclopedia of positions” by Minotauro.

Not to be outdone, de la Riva will show you why he was voted one of the “top five BJJ fighters of all time” by Gracie Magazine as he continues to counter Monteiro`s positions, and like a true chess match, press the attack to victory.

De la Riva and Monteirão will give you so much more than technique; they will expand your understanding of the black belt level Brazilian Jiu Jitsu game and help you be the best BJJ player you can be!