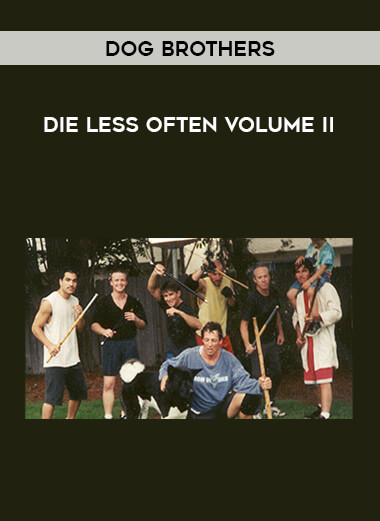 As promised, here we go.
This is the TRUE VOLUME 2 of “Die Less Often,” not the frequently misidentified CD 2 of “Die Less Often Volume 1.”
Vol 2 of Dog Brothers’ legendary knife defense system includes additional drills and concepts for practicing the “dog catcher” defense against “grab and stab” knife attacks.
It also emphasizes the importance of accessing a holstered gun during a full-fledged knife attack.
According to the DB website:
“In DBMA “Die Less Often 1: Intro to the Interface of Gun, Knife, and Empty Hand,” we had our FOF (Force On Force) drills take on some of the characteristics of scenario training, in which the players engage in some acting.”
The goal was to give the viewer a sense of situations in which “the Interface Paradigm” could occur.
In this DVD, we have purposefully limited ourselves to drills designed to isolate the performance of specific physical skills.
We want people who go through training with us to know exactly how far they need to go to ensure a gun solution to a knife problem for their specific skills and fitness levels— and to recognize when combatives are the first step in the solution.
We want them to understand how to maximize their chances with a combative structure that will allow them to “die less frequently” when the excrement hits the fan.
The emphasis here is on the structure that generates the ability to access the gun (or other weapon).
And, most importantly, we want the underlying structure of the gun fighting footwork and angles to be essentially the same as the combatives footwork and angles.
This, in our opinion, is required by the adrenal state.
Just one more thing.
The goal is to avoid situations in which you may or may not need to use these skills.
The goal of this training is for you to understand what the odds are FOR YOU and to incorporate these skills into your “threat management” as needed.