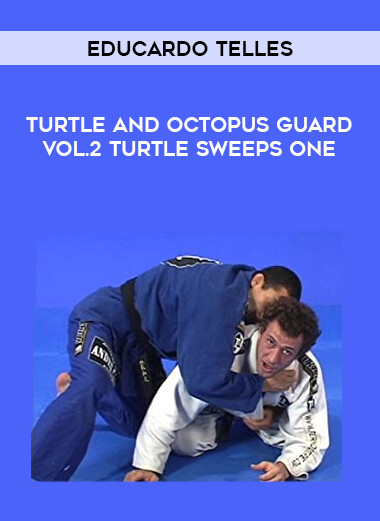 Volumes 1-4 were all done in the Gi, however many of the movements are also available in No-Gi.
Octopus Guard is done No-Gi in Volume 5.
Some folks may desire to try out for the Octopus Guard role.
This is NOT a beginner’s set.
Beginners should focus on mastering the fundamentals.
That being stated, I suggest this set to anyone who likes the Turtle Guard but wants to try something new with the Octopus Guard.
World Martial Arts presents you the greatest grappling instructionals yet! Eduardo Telles, internationally famous for his fantastic Turtle and Octopus guard, featured in this spectacular DVD series.
Telles has revolutionized what fighters and teachers previously thought was achievable from these postures.
His Turtle guard fight game allows him to sweep, reversal, and even submit from the turtle, which was previously thought to be just a defensive stance.
Telles explains everything in this series, from the fundamentals of the position to the most sophisticated facets of his game.
He doesn’t hold back and demonstrates every technique in his repertoire.
Telles also demonstrates his new Octopus guard for submission grappling as an added bonus.
We guarantee you will not see these movements anywhere else!

Telles begins the incredible process of teaching his Turtle Guard sweep game on this DVD.
This DVD has over 22 techniques, including his distinctive sitting up sweep sequence and all of its variants.
These sweeps are quite rare because they were created solely from the Turtle guard.
This is the first DVD ever created on this position and will become one of the most essential introductions to what can be done with sweeps from the Turtle.