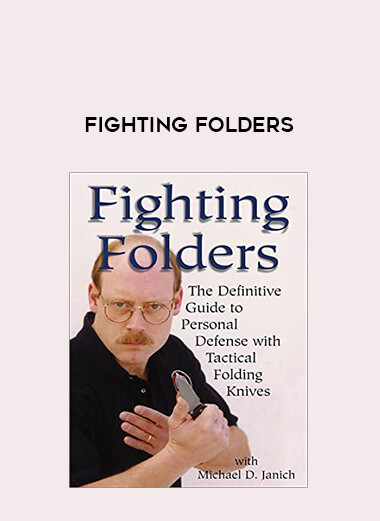 This is a reseed with more content because it looks that it is no longer seeded on this site.
ATTACKING FOLDERS
Personal Defense with Tactical Folding Knives: The Definitive Guide Modern Tactics and Training for the Defensive Use of Tactical Folding Knives One of today’s most popular but little-understood defense weapons is the tactical folding knife.
Veteran knife teacher Michael D.Janich walks you through the frequently misleading and myth-filled world of folding combat knives in this innovative Paladin video production, teaching you the skills you need to wield them effectively on the street.

In this explosive video production from Paladin Press Advanced Fighting Folders, Janich takes his no-nonsense, get-home-alive folding knife methods to the next level.

Janich continues your study via step-by-step teaching in knife fighting footwork, live-hand tactics, high-speed disarms, and advanced reflex training drills, building on the foundation of skill acquired with his best-selling Fighting Folders.
He then demonstrates how to incorporate these aspects into a cutting-edge training program that authentically mimics nearly every potential street attack.

Finally, Janich reveals the secrets of combat knife draws, tactical folder defenses from unfavorable positions, and the techniques of “Speed Stops” – lightning-fast defenses that instantaneously cripple an assailant upon contact.
With this ultimate tactical folding knife instruction, you can sharpen your defensive abilities as much as your blade.

Only for scholarly purposes.

Michael D. Janich is a leading current authority in pistol point shooting and one of the few modern teachers to have directly studied with late close-combat great Col.Rex Applegate.

Michael Janich, a well-known martial arts author and instructor, has invented and constructed everything from blowguns to knives, notably the highly regarded Masters of Defense Tempest folding knife.

Be the first to review “Fighting Folders” Cancel reply