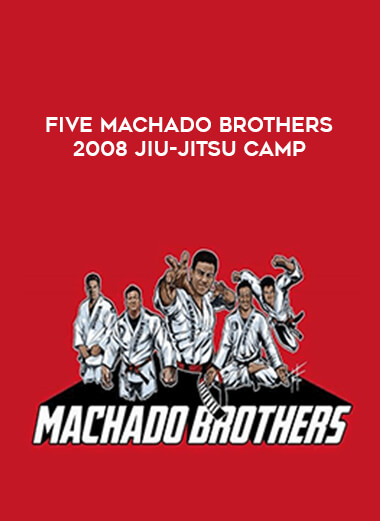 This set features all 5 of the World Famous Machado Brothers.
They showcase some amazing techniques and drills with detail you have never experienced before.
You will finally be able to fill the gaps in your game.
You won’t want to miss this opportunity.
Carlos Machado: Half guard pass with top side submissionsCarlos instructs on the main challenges involving the half guard pass, with an emphasis on working submissions (chokes/armbars) from that position and into the sidemount.
Learn how to get powerful chokes from half guard, sidemount, and top mount position / the spinning from under method of increasing choke pressure from any angle on top.
Jean Jacques Machado: Butterfly guard game for gi and no giBrother Jean Jacques will reveal the secrets of the butterfly guard, with and without the gi, providing several combinations between reversals and submissions from the guard as well as strategy to prevent headlocks when passing the guard.
Hook flips with and without the gi will also be discussed.
John Machado: Secrets of attacking the turtle positionBrother John will make the turtle position one of everyone’s favorite position for control and submission.
Learn how to get the back from the turtle position without using leg hooks, and easily move your opponent into the trap.
Getting the back/ keeping the back/ getting submissions from the back/ transitions to side and full mount position/ learning the hookless back control game.
Rigan Machado: X grip guard gameBrother Rigan teaches the new evolution of playing the guard with the cross grip game, an exciting and powerful way of rendering opponents useless when passing your guard.
Students will see the whys and hows of making the X grip a dreadful strategy against all adversaries.
Points covered are: the X grip basics/ the X grip choke and armbar game/ X grip triangle game/ X grip shoulder lock game/ 180 degree X grip game.
Roger Machado: Guard attacks and bottom escapesBrother Roger instructs on how to effectively attack from the guard, using armbars from unexpected angles, and adding a whole new set of escapes when trapped on the bottom.
Points covered are: different surprise armlocks from the guard/ Combining escapes from with guard submissions/ solo drills for both improving the guard and bottom escapes/ Learning how to avoid getting stuck when someone passes your guard.
Machado Philosophy – A passionate lifestyleThe five Machado brothers talk about how their background and upbringing has shaped their lives.
With more than four decades of living and breathing BJJ, the Machado family is now a dominant force in the art.
Martial arts for this family is not only a passion, but a way of life!