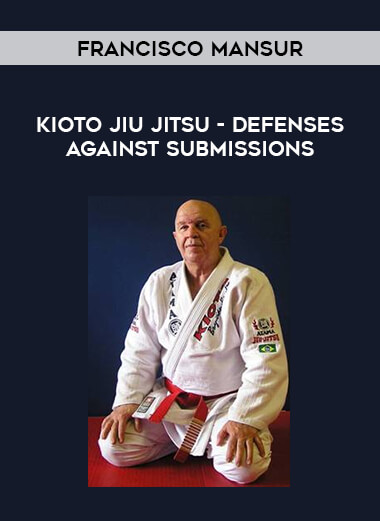 Grand Master Francisco Mansur, 9th degree red belt in Brazilian Jiu-Jitsu, is one of only six men in the world with a black belt given by Master Helio Gracie. He is the founder of Kioto Jiu-Jitsu, a system of teaching that is easy to learn and adaptable due to the progression in so far as the movements of the fight are concerned.

Considered as one of the greatest authorities in the world in the art of teaching Brazilian Jiu-Jitsu, Master Mansur, 9th degree black belt, presents his new DVD on the defenses against the most feared submission techniques of this style. Just as with previous work, Mansur explains progressively and in great detail how to employ Jiu-Jitsu techniques to escape form these situations. Arm-locks, Americans, chokes, leg-locks, and foot-locks. For all these techniques there are defenses in Jiu-Jitsu that will allow you to counter-attack and shift the fight to your favor.

Considered like one of the greater world-wide authorities in the art to teach the Brazilian Jiu-Jitsu, the Mansur Teacher, black belt 9º degree, presents/displays in its new DVD the the most feared defenses to us against technical of conclusion of this style. Like in the previous deliveries, Mansur explains progressively and in detail how to use the technique of Jiu-Jitsu to escape of these situations. Armlocks, Americans, throttlings, leglocks and keys of pié. For all these techniques a defense exists in the Jiu-Jitsu that will allow a counterattack you and to praise/pour off the fight to your favor.