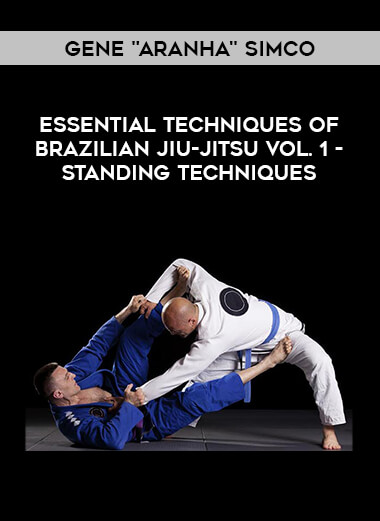 Essential Techniques of Brazilian Jiu-Jitsu Vol.
1 – Standing TechniquesDIVX | English | 480×360 | AVI | 29.
970 fps 1315 kbps | MP3 128 kbps | 625 MBGenre: eLearning
Description:
Begin distribution of 4-dvd rips on the basic techniques of BJJ in the performance of Gene Simcoe.
The first volume includes:Volume 1 – Standing TechniquesLearn The Fundamental Standing technique of Brazilian Jiu-jitsu for Self Defense.
This DVD will detail how to defend yourself against strikers and close the distance in order to clinch.
Takedowns are should from the clinch position and when your opponent is holding you from behind.
This DVD also include a special Highlight Video, Introduction or beginners, and an original soundtrack.
* The fundamental standing technique of Brazilian Jiu-jitsu for self defense.
* How to defend yourself against strikers and close the distance so you can clinch.
* Take downs from the clinch position and when your opponent is holding you from behind.
Extras.
Information: Gene Simco began his Martial Arts training at the age of nine and trained through his childhood until stopping for a brief time to pursue Musical interests.
By the age of nineteen, his lifestyle as a musician had made him frail, unhealthy, and weak.
To create balance, Gene returned to his martial arts training by enrolling himself in both a Jeet Kune Do school and a school of Japanese Martial Arts that specialized in the practice of Jiu-jitsu, Aiki-jitsu and Judo.
Sometimes attending two classes per day, he began a rigorous strength-training program and committed himself to better health.
It was at the school of Japanese Jiu-jitsu that Gene would meet with friends from extensive backgrounds in Greco-Roman Wrestling and Western Boxing.
Soon he would find himself reaching a pinnacle with his Jeet Kune Do instructor and devoted his time fully to the philosophy and study of Jiu-jitsu.
Gene eventually earned the respect of his peers and instructors and was asked to join the Black Belts during their training sessions.
Here, he was introduced to the secrets of Japanese martial arts passed down through generations of warriors.
At this time, Gene was also training at Brazilian Jiu-jitsu academies all over the United States, searching for the best instruction he could find; with the information learned there, he began to improve his grappling skill and depth of understanding in the art of Jiu-jitsu.
His passion for education and entrepreneurial instinct soon drove him to establish the NYMAG academy in Poughkeepsie, NY, where he began teaching the art of Jiu-jitsu as taught to him by his first master.
As his study of Brazilian Jiu-jitsu (Gracie style) continued, his pursuit of the world’s finest training in order to develop a more complete and diverse program for his students led him to California were he was awarded a Blue Belt (in Brazilian Jiu- jitsu) by Joe Moreira.
Because of his understanding of Jiu-jitsu, it was not long before Marcio Simas awarded him a Purple Belt while training at his school in Florida.
It was the achievement of this rank and love of the Brazilian form that inspired Gene to strip himself of his black belt in an act of humility that showed him to be a true Martial Artist.
From that point on, he wore his rank in Brazilian Jiu-jitsu proudly and began teaching under a new flag.
He spent nearly the next four years of his training at this rank, gaining experience on the mat in both sportive and non-sportive matches.
During this time, Gene’s reputation as an instructor grew by leading many fighters to victory in Sport and No Holds Barred tournaments, causing his academy to flourish.
As business improved, the prospect of traveling extensively to train became less likely and, consequently, he employed many leading Brazilian Jiu-jitsu Black Belts and Champions to teach at NYMAG.
It was through this training that Gene had the opportunity to travel to Brazil and gain some of his most valuable experience, leading him toward the rank of Brown Belt, which was awarded to him in 2002 by Michael Jen.
During this time, Gene founded the largest resource for Jiu-jitsu on the Internet, www.jiu-jitsu.net, becoming the first to offer online illustrated BJJ techniques and the first to author multiple books on the subject of Brazilian Jiu-jitsu.
In 2005, after ten years of BJJ training, authoring several titles and producing numerous champions, he was awarded his Black Belt from Brazilian Jiu-jitsu Champion, Marcelo “Nigue” Sandes.
Gene has starred in several instructional DVDs and is recognized as the Leading American Author of Brazilian Jiu-jitsu books with seven titles to his credit, including Brazilian Jiu-jitsu Basics: Mastering the Essential Techniques, No Rules Brazilian Jiu-jitsu, and the largest BJJ book ever written, Brazilian Jiu-jitsu, The Master Text.
He has served as the Principal Instructor at the NYMAG Academy of Brazilian Jiu-jitsu since 1997.