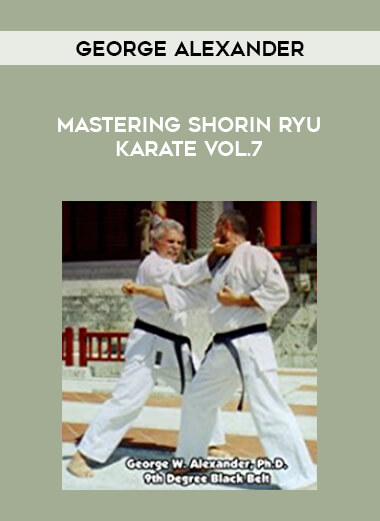 This video collection is the most in-depth exposition of Okinawa’s Shorin Ryu Karate ever captured on tape.
Shorin Ryu is one of the oldest and most traditional karate styles, focusing on pure self-defense through Kata (forms), Bunkai (Practical Applications & Self-Defense), and Kumite-Free Sparring.
You will also learn pressure point striking, takedowns, Tuite Joint-Locking, and Grappling.
George Alexander, 9th Dan, is your teacher.
He is the “World Pioneer of Shorin Ryu Karate,” having been trained in Okinawa, Japan. He has taught this dynamic technique all throughout the world, including the United States, Canada, Europe, and Asia.
In 1964, he enlisted in the United States Marine Corps and began training.
He traveled to the Far East, seeing Japan, Okinawa, and Southeast Asia.
He rapidly established himself as a tough combatant.
He held the titles of World Karate Champion, International Karate Champion, and National AAU Karate Champion as a competitor.
Seisan and Seshin Dai from Tape 7