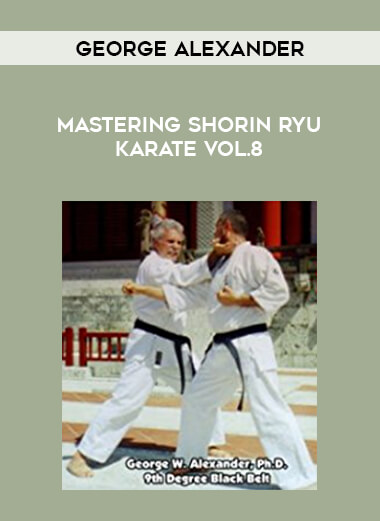 This video collection is the most comprehensive presentation of Okinawa’s Shorin Ryu Karate ever put on video.
Shorin Ryu is one of the oldest and most traditional forms of karate and is based on pure self-defense of the Kata (forms), Bunkai (Practical Applications & Self – Defense) and Kumite-Free Sparring.
Additionally, you will learn pressure point striking, takedowns and Tuite Joint-Locking and Grappling.
Your instructor is George Alexander, 9th Dan.
Trained in Okinawa, Japan he is the “World Pioneer of Shorin Ryu Karate.” He has spread the teachings of this dynamic art worldwide and has taught in the U.S., Canada, Europe and Asia.
He began training while in the United States Marine Corps in 1964.
He journeyed to the orient including Japan, Okinawa and Southeast Asia.
He quickly earned a reputation as a rugged fighter.
As a competitor he earned the titles: World Karate Champion, International Karate Champion and National AAU Karate Champion.
Tape 8-Chinto and Gojushiho