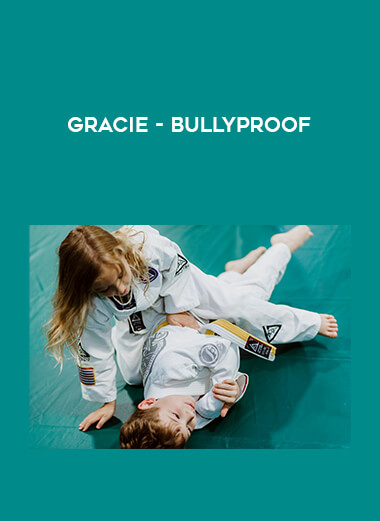 The Gold Medal MShioda Gozo (1915-1994) was one of the earliest pupils of Aikido founder Ueshiba Morihei and created Yoshinkan Aikido in 1956.

One of the finest Aikido practitioners of all time.

This is the entire set of ten videos. Yo -According to the National Education Association, 160,000 children in the United States leave school every day in order to escape a bully.
–
The majority of school shootings, according to the US Secret Service, have been connected to situations of extreme bullying.
–
Adults who were bullied as children had greater levels of sadness and worse self-esteem than those who were not.
–
All DVDs are in Region 1 format and are intended to work with all Region 1 DVD players.
For the first time, the Gracie Family’s three-generation child-teaching method will be accessible on DVD! Ryron and Rener take you step by step through the EXACT technique that their father used on them between the ages of 4 and 14, so you may prepare your child for life the Gracie way – all from the comfort of your own home! Parent Preparation Course (Disc 1) Gracie BULLYPROOF is not only the first self-defense instructional DVD series created just for children, but it is also the first instructional DVD series created expressly to educate you, the parent, how to teach your child.
On disc 1, Ryron and Rener teach you all you need to know to boost your child’s confidence and make the Gracie BULLYPROOF program a success in your house.
Transfer Teaching – Video-The Most Common Mistake – Video-The Critical Challenge – Video-The Critical Connection – Video
Discs 2 and 3: Gracie GamesTM
Rorion did not teach his children Gracie Jiu-Jitsu at first; instead, he “played” Gracie Jiu-Jitsu.
Rorion engaged his children in the learning process while informally exposing them to the core concepts of Gracie Jiu-Jitsu through a series of ten amusing jiu-jitsu games.
Discs 2 and 3 contain all ten Gracie Games.
Crazy Horse -Gracie Game 4 -VideoDisc 4: Rules of Engagement
On disc 4, your child will learn the exact rules for using their techniques, as well as Verbal Jiu-Jitsu ways to help them face up to persistent verbal bullies.
By teaching your kid the Rules of Engagement before they learn the Jr.Combatives skills, you can assure that they do not misuse their authority and that they will not be scolded if they ever need to use the tactics in self-defense.
Disc 4-“Verbal Jiu-Jitsu” Sample Clips – VideoDiscs 5-9: Jr. CombativesTM
Rorion began teaching his children the 33 extremely efficient non-violent methods covered in the Jr. Combatives course only after they fell in love with the fun part of the art.
By teaching your child these tactics, you will significantly improve their capacity to protect themselves and, more crucially, significantly enhance their confidence, making them less likely to be targeted by bullies.
Disc 10: The Belt Testing Procedure
Belt promotions are employed at the Gracie Academy to signify success and keep students interested in the learning process.
Your youngster will be able to exhibit their talents and qualify for formal belt promotions from home thanks to a novel Video Evaluation Process! On disc 10, the technique is described out in depth, and Roran Gracie (10) shows the entire white-yellow belt exam procedure. Along with your collection, you will receive a free DVD of the Gracie KidSAFETM Child Abduction Prevention Course! The Gracie Brothers empower your children with direct conversations about the most frequent ploys used by kidnappers as well as the exact methods they employed as youngsters to avoid falling prey to the ultimate kidnapper – drugs – in six powerful mini-courses.
This information may be enough to save your child’s life!
Gracie KIDSAFE DVD-Drug Defense – Video-Sample Clips
All DVDs are in Region 1 format and are intended to work with all Region 1 DVD players.
Aikido video series on the Fundamentals of Yoshinkan Aikido on three DVDs.

It was converted to AVI format and contains only the English narration and subtitles.

I was unable to get the menus to operate, so they have been removed.

A Step-by-Step Program of Mental Exercises to Make You a Winner Every Time is an enjoyable workout for combat sports.

To release the master within you, use the principles of Gold Medal Mental Workout, which have been tested against the greatest in the world.

Allow Dariusz Nowicki, the top East European sports psychologist, to show you how psychology can work in tandem with your ability and physical conditioning to help you win!

You will: * Get rid of doubts and fears—overcome lifelong barriers to achievement * Face every opponent with confidence, dominating the fight * Discover the secrets of relaxation and concentration * Boost your energy level and mental alertness * Shut out distractions and always carry out your plan * Feel at home and at ease in any competition hall

Be the first to review “Gracie – BULLYPROOF” Cancel reply