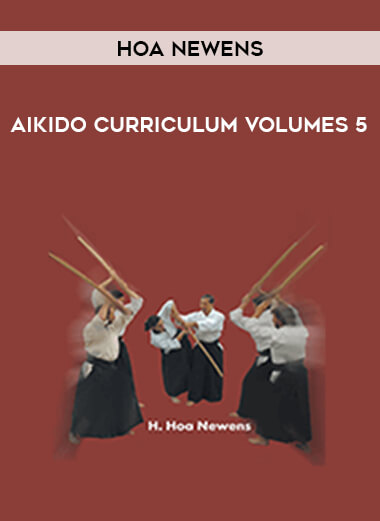 Description:This includes a systematic approach to Takemusu Aikido put together by Hoa Newens.Newens is a student of the late Saito Sensei, who trained daily with the founder of Aikido for more than twenty years.The name Aikido consists of three Japanese Characters (Kanji): AI, to unite or harmonize; KI, spirit or energy; DO, way or path.The last character is significant in that it implies a path, or philosophy that one follows in one’s life.This delineates Aikido from jutsu or systems of techniques.Unlike many Japanese martial arts (ie Karate, Jujutsu, etc), Aikido emphasizes the flow of ki (chi in Chinese).All of the techniques and exercises in Aikido are meant to help the practitioner learn how to maximize the flow of Ki and utilize this internal power.Aikido uses many breathing and ki flow exercises.Techniques are nothing but learning aids; ultimately, the basic techniques which are taught are meant to teach the deeper principles of Aikido.The Founder considered Takemusu Aikido to be the highest form of Aikido.Takemusu contains two Japanese characters: Take (Bu) = Martial, and Musu = To be born.These two characters combine to refer to martial movement spontaneously created, without active thought, resulting in a pure Aikido technique.This is the highest ideal.It is a free flowing movement which blends so completely with an attacker or attackers that the situation is resolved without conflict, and optionally, without harm.Takemusu Aikido includes the use of bokken and jo.However, these weapons are used in practices to develop centeredness and the proper flow of energy through extension and focus.The weapons system is not taught as an actual combat system, but rather as an aid to develop proper ki and kokyu (breath power); the weapons are a supplement to open-hand aikido training and overall ki development.Takemusu Aikido is the type of aikido taught by Hoa Newens, and it is the emphasis of these DVDs.Like several internal Chinese martial arts (especially Bagua), aikido emphasizes stillness while in motion, circular movements, harmonizing with opponents rather than clashing, and a completely relaxed and supple mind and body.It is moving meditation.Hoa Newens – Aikido Curriculum Volumes 1-7In this series, Hoa Newens shares his 38 years of experience in Aikido with emphasis on the teachings of Morihiro Saito.Building on the monumental work of his late teacher, Aikido Curriculum presents a comprehensive repertoire of techniques in the most practical way for students to use.Aikido Curriculum 1 Volume 5 Bukidori and includes the following chapters: • Preface • Fundamentals • Tantodori • Tachidori • Jodori • Jonage • Embu • Acknowledgements Aikido Curriculum 6