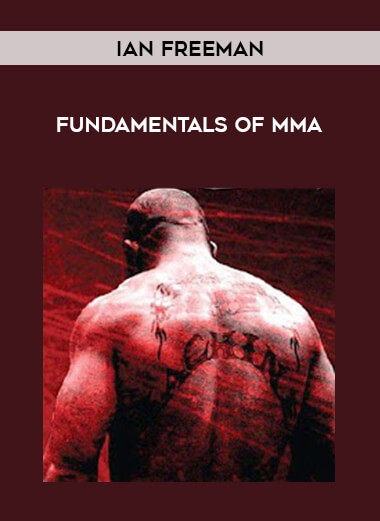 Ian Freeman – Fundamentals of MMAUK MMA legend – Ian ’THE MACHINE’ Freeman.
LEARN HOW TO FIGHT UFC styleIan was the first UK fighter to compete in the UFC and was also made famous for demolishing UFC Heavyweight champion – Frank Mir in UFC 38.
Since then, THE MACHINE has made further MMA history by coming out of retirement to claim the Cage Rage Light Heavy Weight title from UK champion Paul Cahoon.
Ian is famous for his trademark Ground and Pound style that he truly has down to an art form.
These DVD’s series cover THE MACHINE fundamentals of MMA.
DISC 1 THE CLINCHCLINCH CONTROL.
Also known as Greco Roman grappling.
Ian shows you how to stand and grapple with your opponent and gain the best position for takedowns and striking from the clinch.
Where to put your feet and body in the clinch and the reasons why.
TAKEDOWNS FROM CLINCH.
Learn double under hooks, one under – one over clinch takedowns and many more.
Take a single leg from the clinch and control your opponent slamming him to the mat.
STRIKING FROM CLINCHOtherwise known as dirty boxing.
Ian shows how to strike your opponent while at close range in the clinch.
How to control while striking and using strikes to set up the takedown and escapes.
DISC 2 STAND UP STRIKINGSTAND UP STRIKINGLearn how to throw down leather in MMA.
Ian shows the basics of a good punch and also kicks.
Learn how to create that KO power with your body movement and using your hips when you throw a strike.
Jab, cross, hooks, uppercuts and combinations.
Front kick, liver kick power kicks and more.
DISC 3 MACHINE GROUND n POUNDGROUND AND POUND FROM GUARDThis is what The Machine is known for, his powerful and accurate GnP.
Ian learns you how to create power in your punch while on the floor, along with GnP combinations.
Half guard , arm control, looping punch, wrist control and much more.
GUARD PASSLearn how to pass your opponents guard with step by step instructions from The Machine.
Ian shows how and why.
Simple instructions to make the best guard pass you could learn.
GNP FROM SIDE MOUNTAgain a Machine trade mark, GnP from side control.
See how Ian wins most of his fights with his own style of GnP moves and teaching you how to control your opponent from side control.
DISC 4 MACHINE GROUND n POUND 2GROUND AND POUND FROM SIDE MOUNTCarrying on from DVD 3, Ian shows more ways to GnP your opponent from side control.
Also variations on side mount submission holds including strikes from submissions .
PASS TO FULL MOUNTShowing the best ways to gain mount.
Using your opponent if he makes the mistake of using the Brazilian mount defence.
How to gain mount without being rolled.
VARIATIONS ON MOUNTIan shows the closed mount, the low mount and the high mount.
The good and bad points of each position.
GNP FROM MOUNTStriking from the mount is a strong a powerful way to win any fight.
Punches, elbows, hammer fists and knees.
GNP FROM REAR MOUNTGnP is the Machine’s favourite style of fighting.
Learn GnP moves while taking rear mount control.
Also learn how to do the Rear Naked Choke correctly.
DISC 5 CAGE CONTROLCAGE CONTROLOne of the under trained skills in the gym.
Ian will show you how to control someone against the cage wall.
How to position yourself and your opponent.
DIRTY BOXINGStriking your opponent using dirty boxing.
Throwing knees, elbows and punches.
Setting up for takedowns or to break away to stand and strike.
TAKEDOWNSLearn numerous forms of takedowns against the cage from The Machine, such as the double leg, single leg, inside trip and his famous high double pick up and slam takedown.
DISC 6 MACHINE CARDIO FOR MMAMACHINE CARDIO FOR MMAWant to know what it takes to get fit for a MMA fight? In this DVD Ian shows how to do this.
Various gym cardio training methods that have got him fit and ready for his ultimate fighting championships.