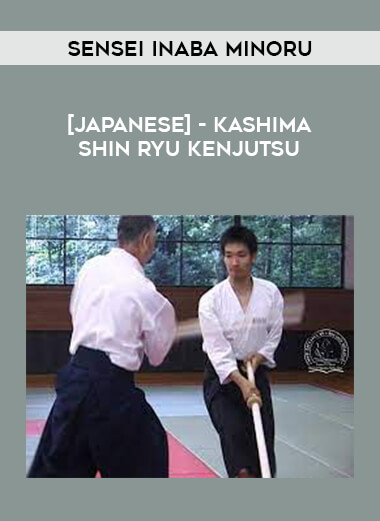 Inaba Minoru sensei is the director of the Meiji Jingu Shiseikan in Tokyo, where he teaches both Aikido and Kashima Shinryu Kenjutsu.
The Meiji Jingu shrine was originally constructed in 1920 in memory of the Emperor Meiji, and is one of the most important Shinto shrines in Japan.
The Shiseikan dojo at the Meiji Jingu was established in order to promote education through traditional martial arts, such as Kyudo (Japanese archery), Judo, Kendo, and Aikido.
Kashima Shinryu is one of the older traditional Japanese martial art (koryu) which developed during Japan’s turbulent mediaeval period, and its teachings are believed to be the core of Japanese martial arts.
It was revitalised by Kunii Zen’ya, the 18th generation headmaster of Kashima Shinryu who died in 1966.
Inaba sensei is a direct student of Master Kunii Zen’ya.
Swordsmanship helps develop a relaxed and clearly focused movement, with power and subtlety.
It also develops “ma-ai” – judgment of distance and accuracy of timing.
Studying Kashima Shinryu Kenjutsu is therefore a valuable complement to Aikido studies for those who are interested in the Budo aspects of Aikido.
Inaba sensei holds an 8th dan in Aikido (Aikikai).
Japanese spoken, English subtitles.