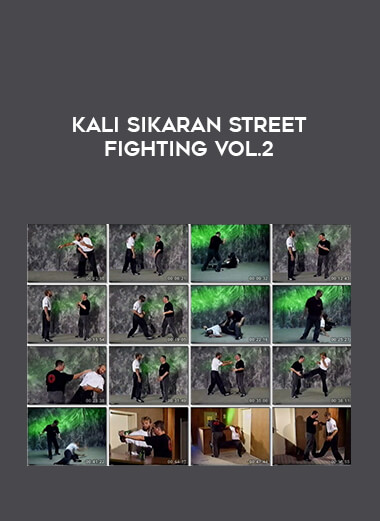 Kali Sikaran Street Fighting (Volume 2)Kali Sikaran is a Filipino martial arts system, founded by Jeff Espinous and Johan, and it is one of the main styles of the International Kali Arnis Eskrima Federation. The art of Kali has its roots in the ancient Filipino history dating to before the Majapahit Empire, which dominated South East Asia during the 5th and 6th centuries. The art was used against the Spaniards in their attempts to conquer the islands. The famous Ferdinand Magellan was defeated by the national hero Lapu Lapu that was an ancestor of today’s arts. The International Kali Sikaran Association was developed and founded by Punong Guro Jeff Espinous and Punong Johan Skalberg. Kali Sikaran has its roots in the Martial Arts of the Philippines and the South East Asian countries. The training concepts of Kali Sikaran are unique to the system. They are based on Panantukan (Filipino Boxing), Sikaran (Filipino Kick Boxing), Stickfighting, Daga (Knife Fighting Training), Kadena De Mano (Close Quarters Range) and Dumog (Grappling). In Kali Sikaran these concepts are woven together into a complete and very effective fightingsystem. Any improvement in one aspect of the system will accelerate change and immediately enhance another. In a combination of empty hand training and weapons training , the practitioner will develop speed, coordination, stamina, strength and reflexes that support self-defense and fighting skills. The Kali Sikaran practitioner is trained to be able to adapt to any given situation. Language-English