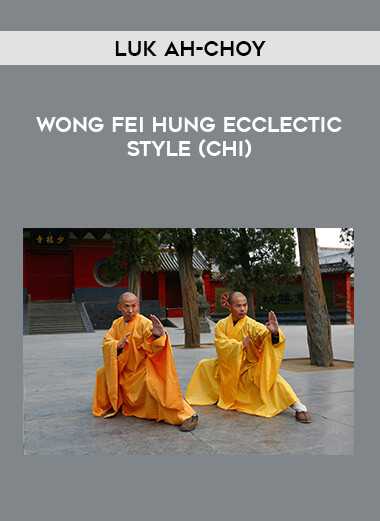 Wong Fei Hung Ecclectic styleLanguage: Chinese This branch of Southern Fists claims lineage from the famous Chinese folk hero Wong Fai Hung (1847-1924).
Son of Wong Kai-Ying,one of Canton’s “Ten Tigers”, who himself had studied from Shaolin master and monk Luk Ah-Choy.
Wong’s own Southern Shaolinis captured in his Hung Fist, a varied style with deep horse stances and mixed arm motions some of which could be consideredSouthern Long Fist.
A prominent feature is the verbalization of different sounds as an active ingredient of Hei Kung training.
This stylecomposes of Hung Gar, Wing Chun, Fut Gar(Buddha style) and Lung Ying Pai(Southern Dragon style).
Wong Fei-hung (July 9, 1847-May 24, 1924) was a Chinese martial artist, a traditional Chinese medicine physician, acupuncturist and revolutionary who became a folk hero and the subject of numerous television series and films.
He was considered an expert in the Hung Ga style of Chinese martial arts.
Wong is visibly the most famous Hung Ga practitioner of modern times.
As such, his lineage has received the most attention .
As a physician, Wong practiced and taught acupuncture and other forms of traditional Chinese medicine at Po-chi-lam, his private practice medical clinic in Foshan, Guangdong, China.
A museum dedicated to him was built in Foshan.
Wong’s most famous disciples included Wong Hon-hei (his son), Lam Sai-wing, Leung Foon, Tang Fung, Wong Sai-wing and Ling Wan-kai.
Wong was also associated with “Beggar So” of the Ten Tigers of Canton.
Wong was born in Foshan during the reign of the Daoguang Emperor in the Qing Dynasty.
At the age of five, he started learning Hung Ga from his father, Wong Kei-ying.
When he was 13, he learnt the Tour de Force of Iron Wire Fist and sling from Lam Fuk-sing , a student of “Iron Bridge Three” Leung Kwan, after meeting Lam in Douzhixiang during a martial arts street performance.
He learnt the Shadowless Kick from Sung Fai-tong later.
In 1863 at the age of 17, Wong set up his first martial arts school in Shuijiao.
26 years later in 1886, he opened his Po-chi-lam clinic at Ren’an.
In 1919, Wong was invited to perform at Chin Woo Athletic Association’s Guangzhou branch during its opening ceremony.
Wong died of illness on May 24, 1924 in Chengxi Fangbian Hospital in Guangdong.
He was buried at the foot of Baiyun Mountain.
Wong’s wife, Mok Kwai-lan , and his two sons, along with his disciples Lam Sai-wing and Tang Sai-king , later moved to Hong Kong and established martial arts schools there.
In legend, Wong was recruited by Liu Yongfu, commander of the Black Flag Army, to be the army’s medical officer and martial arts instructor.
Wong also instructed Guangdong’s local militia in martial arts.
He followed Liu’s army to fight the Imperial Japanese Army in Taiwan before as well.
Personal lifeWong married four times in his life.
His last wife, Mok Kwai-lan, died in Hong Kong on March 11, 1982.
He had four sons.
The oldest, Wong Hon-sam , was shot to death by a colleague in a drunken brawl in 1923.
As a martial artistWong was a master of Hung Ga (also called Hung Fist).
He systematized the predominant style of Hung Ga and choreographed its version of the famous “Tiger Crane Paired Form Fist”, which incorporates his “Ten Special Fist” techniques.
Wong was famous for his skill with the technique known as the “Shadowless Kick”.
He named the techniques of his skills when he performed them.
Wong was adept at using weapons such as the staff and southern tiger fork.
One tale recounts how Wong defeated a group of 30 gangsters on the docks of Guangdong using the staff .
Wong is sometimes incorrectly identified as one of the “Ten Tigers of Canton”.
His father, Wong Kei-ying, was one of the ten but he was not.
Wong is dubbed as “Tiger after the Ten Tigers” for his heroic efforts to defend the pride of the Chinese when the Chinese faced oppression from foreign powers .
This style is very strong and a mixture of many of the styles as strong and famous as Hung Gar, Wing Chun, Fut Gar(Buddha style) and Lung Ying Pai(Southern Dragon style)Road #1 Road #2Road #3Ch’i Kung