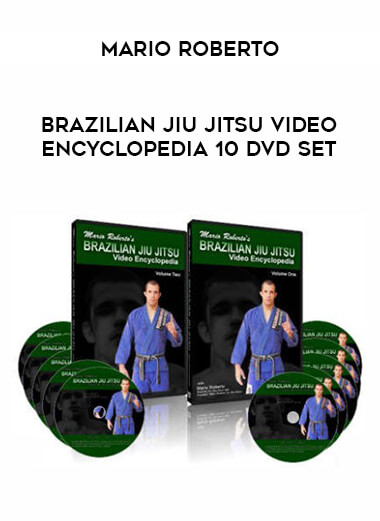 This is a COMPREHENSIVE, VERY THOROUGH 10 DVD TRAINING SET geared towards getting you “up to speed” on ALL THE FUNDAMENTAL ISSUES OF GROUND GRAPPLING.
Nowhere else will you find so many techniques, explained in such WORLD CLASS DETAIL as you will RIGHT HERE in this series.
NO EXPERIENCE REQUIRED!Mario will show you, STEP BY STEP, exactly what you need to know to have a good working knowledge of how to KICK BUTT AND TAKE NAMES ON THE GROUND.
Learn Correctly, Absolutely and Positively All the Essential Ground Fighting Skills You Need To Protect Yourself.
This Set Contains Over Eight Hours of Instruction and is Literally Overflowing with an Unprecedented and Incredible Amount of Training Information.
Disk 1 (75 min.):BJJ Takedown Theory for the Street: How to “close the gap” and take that man down without getting busted up!BJJ takedowns that Work: for that “dark alley” like the “Baiana” and the “Cinturada”The “aggressive way to mount”The all powerful cross choke and how to defend itTwo ways to armbar someone from the mount and ways to defend against this moveThe Americana lock and defenseTwo ways to get the “ezechiel choke”, and how to defend against itGetting the back mount (aka.
“back grab”) positionHow to apply the arm triangle
Disk 2 (64 min.):3 Ways to Escape the Dreaded Mount PositionWays to Attack Your Opponent from Side Control (Including the “Brabo” Choke)Ways to Attack Your Opponent When you Have His Back and How to Escape when someone has yours!How To Attack Your Opponent from the “North-South” position and how to escape from it
Disk 3 (59 min.):Various attacks from the guardHow to attack with a cross chokeTwo defenses against the cross chokeHow to apply standard armbars as well as the tricky “escalating” armbarHow to defend the armbar from guardHow to execute the kimura lock and how to get out if you get stuck in this lock!How to execute the inverted arm barThe all mighty Guillotine choke and the defense against itHow to capture someone’s back from your guardHow to trash your opponents shoulder with the “omoplata” lock and how to defend against itThe sneaky “Ezechiel choke” and how to defend itHow to correctly apply the arm triangle chokeHow to attack with a triangle choke and two ways to defend against it
Disk 4 (72 min.):3 ways to pass the “half guard”6 great half guard moves from the bottom positionKnee in stomach attacks (kimura, armbar, cross choke, collar choke, nutcracker choke)How to apply killer footlocks, kneebars, and toe holdsHow to escape from leglocks
Disk 5 (59 min.):How to “breakfall” properly so you don’t get hurt when falling or being thrownHow to execute the best judo throws for jiu jitsuHow to structure a class or workoutCondtioning tips for improving your BJJDisk
6 (50 min.):Basic Drills to develop your “open guard” skillsWays to Break Open A Closed GuardSeveral ways to pass the guard and get a dominant position
Disk 7 (42 min.):Numerous ways to choke, takedown, armlock, and back mount someone when they are “balled up” in the “turtle” positionHow to choke someone with “the “crucifix” moveHow to escape from the crucifix chokeWays to defend yourself and sweep your opponent when you are on the bottom in the turtle position
Disk 8 (43 min.):How to sweep an opponent from the guard with a hook sweepHow to sweep an opponent from the guard with the butterfly sweepHow to sweep an opponent from the guard with the “belt and knee” sweepHow to sweep an opponent from the guard with the arm drag sweep, bridge sweep, and various outer hook sweeps,How to execute the highly useful “tripod sweeps”.
Disk 9 (40 min.):How to keep someone down in side controlQuick and effective ways to escape from side controlHow to use the “sideways side control”Awesome attacks from sideways side controlHow to escape from sideways side controlMounting tactics
Disk 10 (65 min.):Wrestling takedowns like the “double leg” and single legLearn the wrestler’s sprawl and “go behind”Fundamental strategies for tying a striker up in a clinchHow to get out of various “streetfighter” holds like the headlockThe standing guillotine and the defense against itHow to strike from the guard – both top and bottomHow to execute leg chops and “bicycle kicks” from the guardHow to best strike an opponent from the knee on belly positionHow to best strike an opponent from the mounted position