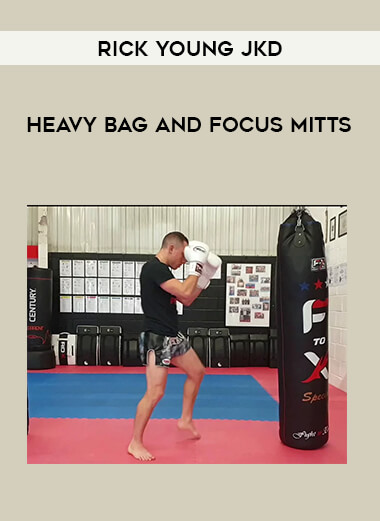 Here’s the next few Rick Young dvdsRick Young dvds are great, very well presented and packed full of info.
Rip has been upscaled to 720p.
Rick Young provides beginners with an advanced programme in the use and benefits of heavy bag training.
Covered in this volume are long and close range punches, the use of elbows and forearms, heavy and explosive hitting and how to combine your tools.
Covered in this DVD are how to hold and feed the mitts correctly, how to hit with proper body mechanics and how to hit in combination.
There is also a section on hitting the body using the body protector in conjuction with focus mitts.
This DVD is essential training for any artist in any style.
Below is some general info about Rick.
Rick Young BiographyRick Young has been studying martial arts since 1975.
Beginning his training under Shaun Shanley, Rick then began to study Wado Ryu Karate under sensei Hamish Adam, along with boxing and grappling.
In 1979, when he was seventeen, Rick first met and became a student of the legendry Dan Inosanto.
In 1984 Rick travelled to Los Angeles California to train with Guro Inosanto and other prominent martial artists.
Since then Rick has travelled to the Inosanto academy at least once but usually twice a year.
In 1995 ( the certificates were backdated to 1993) Rick was awarded his Full instructorship by Sifu Inosanto in Jeet Kune Do, Jun Fan Gung Fu and The Filipino martial arts.
This made him the first person outside of the USA to be given this honour.
Some of the countries Rick has trained and taught at include Australia, USA, Brazil, Japan, Germany, Switzerland, Spain, Poland, France and all over the United Kingdom.
He has been featured in numerous martial arts publications including Martial arts illustrated, Combat, Grappling, Fighters and Fighting arts international.
Rick trains and teaches in Edinburgh Scotland.
Rick’s credentials include;Full instructor in Jun fan Gung Fu/ Jeet Kune Do under Sifu Dan InosantoFull instructor in the Filipino martial arts under Magulang Guro/ Tuhon Dan InosantoLevel IV instructor in the Majapahit martial arts under Magulang Guro/ Tuhon Dan InosantoLifetime achievement award from the Inosanto AcademySenior instructor in Jeet Kune Do/ Jun Fan grappling under Sifu Larry HartsellFull instructor in Progressive fighting systems under Sifu paul VunakFull instructor Jeet Kune Do/ Kali under Sifu Rick FayeFull instructor Combat Submission Wrestling under Sensei Erik PaulsonBritish, European cup, 3x Pan American and 3x Masters and Seniors champion in Brazilian Jiu JitsuAwarded Brazilian Jiu – jitsu black belt by Mestre Mauricio Gomes on October 1st 20052nd Degree Blackbelt in Brazilian Jiu – jitsuBlack belt in JudoSenior instructor British combat association2nd Dan black belt Karate