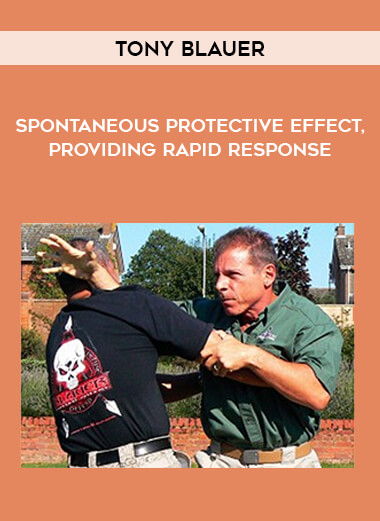 The concept of SPEAR (Spontaneous Protection Enabling Accelerated Response – Spontaneous Protective effect of providing Fast Response (to attack)) is based on completion of an instinctive human response to danger suddenly appeared.
Specificity is that a lot of Blauer says, and what he says, often more valuable than what it shows.
SPEAR Employing this system like the Police because it allows you to neutralize the surprise attack and makes it possible (both in time and by mutual arrangement) in order to grab the service weapon.
In the one-armed version of the SPEAR (half-SPEAR) has very much liked by someone on duty to make their way with pistols in one hand by an unknown nooks and crannies.
Then half-SPEAR very good saves gun control, if someone from behind a corner and try to pop the trunk otymat.
SPEAR really taught police, military and law enforcement agencies a number of United States (US ARMY Special Forces & SPECIAL OPERATIONS, US AIR FORCE , US NAVY SEALs, FEDERAL AIR MARSHAL SERVICE, the US COAST GUARD, DEPARTMENT OF ENERGY, SECRET SERVICE, FEDERAL LAW ENFORCEMENT TRAINING CENTER, US MARSHALS).
Plus SPEAR trained instructors that train special forces and counterterrorism units of Great Britain, Germany, Avtralii and New Zealand.
Contents : SPEAR ~ 4:00 Seminar on the system SPEAR (one of the first).
Explains the concept of SPEAR, pre-combat position of the hands (like a Fence from Geoff Thompson), are given training exercise demonstrates the use of SPEAR for protection against attacks with a knife.
Inside The SPEAR ~ 2 hours 30 minutes This video is dedicated to a detailed analysis of the mechanics of movement SPEAR in response to various types of enemy attacks, but also focuses on how you proceed after the first movement of the enemy neutralized “spear”.
SPEAR System for Women and Self defense coaches – Rape Safe ~ 2 hours 40 min video on a female self-defense.
Demonstrates the arsenal of techniques for close combat (strikes palms, elbows, knees, ankles and tearing movement “claws”).
The variants of self-defense in different scenarios and different provisions (including lying).
How To Beat a Grappler ~ 1 hour 55 min use SPEAR to counter wrestling technique.
SPEAR System Street Defence Vs The Most Common Street assaults ~ 32 min video, created by “at the request of students SPEAR.
Show the application of the concept of SPEAR in various situations that arise, so to speak, in pre-conflict phase (grips, threatening gestures, etc.).
Close Quarter Toolbox ~ 1 hour 57 minutes and the accompanying use of SPEAR arsenal (hand, elbow, knee, toe foot, leg).
How to intercept the initiative, how to start first, how to train for this.
Dangerous Cowards ~ 29 min tactics in a situation with multiple enemies Be A Good Bad Guy ~ 28 min How to “play” the enemy of working out a scenario.
Ballistic Micro-Fights Basics ~ 1 hour 25 minutes of training exercises SPEAR.
Training in full contact with the protective equipment.
SPEAR System Strengthening Drills ~ 51 min recording from a seminar on SPEAR, clarifies certain aspects of this concept.
Train The Trainers Drills ~ 54 min recording from a seminar on SPEAR, explains the application of techniques melee following the original motion SPEAR.
MENTAL EDGE PACKAGE – set of all audio books Blauer, in which he expresses his views on the organization of training, increased alertness, mental training, the fight against terror, etc.